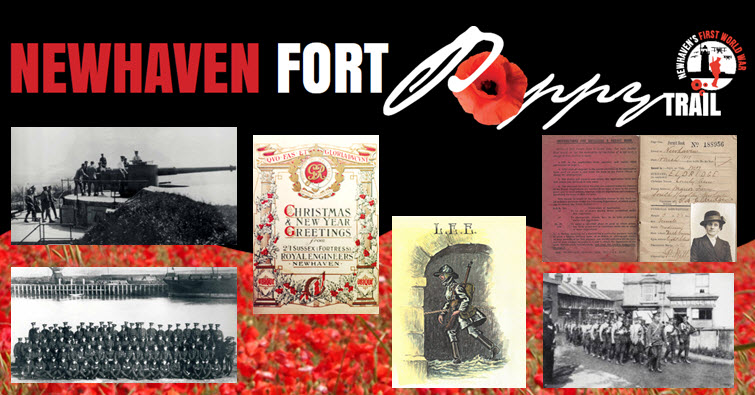 With Newhaven being one of the major supply ports for the Western Front, the town came under military and naval control from the outbreak of the war.

The area of the Garrison stretched from Friars’ Bay (in what is now Peacehaven) in the West, to Blatchington Coast Guard Station in the East, and included the area within a 1½ mile radius of Newhaven Town Station. The purpose of the Garrison was to defend this area from hostile attack and bombardments from land, sea and air, and to prevent enemy landings on the beaches (these were expected to be small landing parties, rather than full scale landings).

A series of trenches and barbed wire entanglements surrounded the area and guards were placed at strategic points. The Fort had two six-inch breech-loading guns and two Quick Firing (Q.F.) twelve pound guns. Working with the Naval Examination Service, which challenged all incoming shipping, the Fort would shoot across the bows of any ships that refused to stop when ordered to.

Accommodation at the Fort

We have details about life at the Fort from the memoires of C. E. Cornford, who joined the Sussex Royal Garrison Artillery (TA) as a Boy Trumpeter in 1912, aged 13. At the outbreak of war, he was posted to the Fort with his father, the Battery Sergeant Major. He describes the sleeping accommodation at the Fort:

“We had good bedding with iron folding bedsteads, three palliasses , which made the bed and were known as biscuits, two army issue blankets, two linen sheets, one pillow and pillowslip. These and the bedstead had to be folded up every day and with the kit and rifle in their racks they were inspected every morning together with the cleanliness of the room which was swept every day and wet scrubbed once a week”.

The gunners worked 24-hour shifts, sleeping in hammocks above the guns.

There was no mains electricity at the Fort. The rooms were lit by petrol gas.

On 18th February 1915, the Lord-Lieutenant of the County, the Duke of Norfolk, inspected the 4th Battalion of the Royal Sussex Regiment. The battalion consisted of 900 officers, NCOs and men, who were in full war kit. The inspection took place between Fort Road and the harbour, and the Duke of Norfolk conveyed “his pleasure at being privileged to come and inspect such a fine body of men”. Afterwards, the Duke inspected the men’s quarters and cookhouses and “expressed his satisfaction at all that he had seen”.

The 4th Battalion (Territorials) Royal Sussex Regiment spent their first Christmas of the war at Newhaven. They rose, as usual, at six.  Following some duties and breakfast, they marched to the church, where they sang Hark the Herald Angels Sing with fervour.

The men enjoyed turkey, plum pudding and mince pies and, as was tradition, they were served by their officers. Following a relaxing afternoon, the men enjoyed a smoking concert.

Members of A and G Companies were billeted at the Workhouse and had their Christmas dinner in shifts. The Workhouse inmates and A Company ate first, then G Company followed at 6pm. Officers and friends of A Company provided nine turkeys and plenty of Christmas puddings. Dessert was provided by Messrs Bannister & Son, who also provided the smokes for G Company. The lady relatives of A Company brought “a huge cracker about 8-ft long and 1-ft thick. A tug-of-war of five men a side was necessary to pull the bon-bon asunder. Packed inside were 120 2oz packets of tobacco for the members of the Company. The non-smokers each received a packet of choice sweets”.

Manning the Searchlights on the Breakwater

The job of 4 Company, London Electrical Engineers, was to man the searchlights situated in two turrets at the end of the Breakwater.

One member of the company recorded his memories of manning the searchlights in ‘Notes on the Newhaven Coastal Fort during 1914-1916’, which is held in the archives of Newhaven Fort.

To get to the searchlights in bad weather, the men would be roped together to stop them from being washed into the sea.  One night, during a particularly heavy storm towards the end of 1915, one of the turrets was hit by an exceptionally heavy wave shattering the “half inch thick plate glass through which the beam was shining”

The engineer described how “the effect of countless heavy seas thudding down on the roof of the turret was frightening and almost as un-nerving as the blast of the fog horn a yard outside the turret”.

Under the Defence of the Realm regulations, Newhaven became a Special Military Area on 22nd September 1916. As such, a permit was required by anyone who wished to enter the town. The Garrison Commander, Lieut.-Colonel C. A. Hankey, suspended the need for residents to have permits until 15th March 1917. From that date, all residents in the Urban District of Newhaven and the Parishes of Piddinghoe, Tarring Neville, Denton Urban, South Heighton and Bishopstone, were required to obtain a permit book, without which they could not enter the town.

The little red book, similar to a passport, was authorised by the local police and gave the name, address and personal description of the permit holder.

The requirement to produce a permit to enter the town was lifted on 2nd December 1918.

Photographs by kind permission of Newhaven Museum and Newhaven Fort.

Unless otherwise stated quotes are taken from the East Sussex News, copies of which are held at The Keep.
With special thanks to Keith Brain, Mike Cornford and the staff of Newhaven Fort.