The Port and Railway 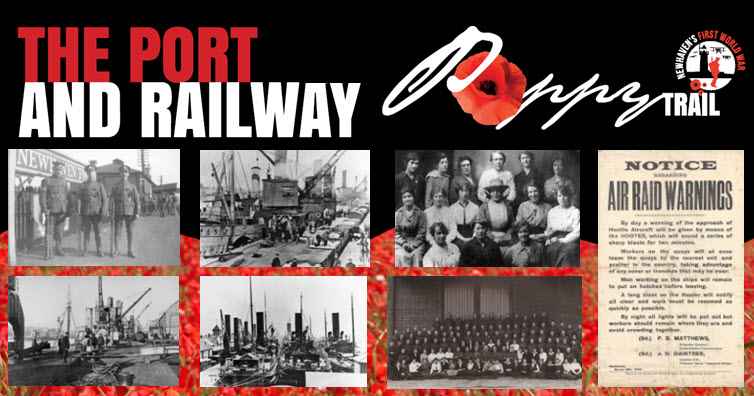 From the beginning of the war, Newhaven was classified as a Defended Harbour, under the Defence of the Realm Act (DORA) 1914. It was to become one of the major supply ports to the Western Front. The London, Brighton and South Coast Railway (LB&SCR), which ran both the railway and the port before the war, worked closely with the Army and Navy under whose control the port now came. Newhaven Harbour Station was closed to the public, and the cross-channel service was diverted to Folkestone. Penalties were applied to people crossing the railway or damaging railway property.

Newhaven Town Station became busy with soldiers arriving at Newhaven to train at the military camps in the town, whilst others left for their onward journey to war. Wounded soldiers and POWs arrived from France and were sent on to hospitals and camps by rail.

On and from 22nd September 1916, Newhaven was designated as a Special Military Area, and no one arriving at Newhaven Town Station was allowed to leave it without a permit issued by the Commandant of the area.

During the course of the war, a total of 19,518 special goods trains, conveying 859,995 wagons of munitions and war stores, arrived at Newhaven.

The wagons containing stores, supplies and munitions for France would be shunted along the quayside for loading onto the Transports (the name given to the ships carrying the supplies). 14 Transports could be berthed at the quayside at any one time, 6 at East Quay and 4 each at Railway Quay and North Quay. In total, 37 vessels could be accommodated at the port during the war, with the Transports sometimes lying two or three abreast.  Additional railway sidings, warehouses and a signal box were built, and 26 new steam cranes added, bringing the total number of cranes at the port to 50.

The average number of dock workers, required each day at the port during the war, was 2,500. They were split into three 8-hour shifts. The work was carried out 24 hours a day, 7 days a week. A special train, for the workers, was run daily from Brighton, picking up at Lewes. It was known locally as the Lousy Lou.

A free hot meal was provided each day for all the workers and a dining hall was constructed, using old railway carriages for the walls and tarpaulin for the roof. Two long tables were placed in the middle, with extra tables in the carriages, enabling 350 people to be fed at each sitting.

As the war progressed and hardships were felt on the Home Front, the temptation of Government food and alcohol, bound for the troops in France, sometimes proved too much. All workers were liable to be searched when leaving the docks. Anyone found with Government stores concealed on their person, was arrested. Arrests were made for the possession of sugar, jam, cheese, pickle, cigarettes and alcohol.

The work was not without its dangers. With so many men working on unfamiliar ships, accidents happened. Examples included men falling down the hold, or in between the ship and the quayside. Some of these accidents proved fatal.

Managing the loading of Ammunition Transports, at North Quay, was challenging.

Commander P. B. Garrett, of the Divisional Naval Transport Office at Newhaven, would only receive 3 or 4 hours’ notice of the contents of the scheduled trains, which were due to arrive at 5am, 11:45am and 8:45pm. In addition to these trains, munitions could arrive at Newhaven from around the country, without notice, making it impossible to anticipate the shipping requirements. Transports could therefore remain in the harbour, partially loaded, presenting a risk to both the harbour and the town.

There were further frustrations in February 1916, when the destination ports in France were sometimes closed. Commander Garrett wrote to the Director of Transports at the Admiralty, saying’ “As I write there are three Transports, each with about 700 tons [of munitions] on board, waiting to leave. Should this place be attacked by aircraft and the bombs fall on to either of these three ships, the whole harbour and town of Newhaven would be devastated”.He suggested that the Ammunition Transports should be diverted to another port, if Boulogne was blocked. The Admiralty, however, felt this solution would be impractical and instead suggested that “danger might be minimised by sending the ships to sea”.

In January 1918, the War Office suggested that women should be employed at Newhaven Docks to undertake the “lightest part of the work”. This would release the men of the Transport Workers’ Battalion for other duties. There had been resistance to women dock workers in other ports, but it was felt that the civilian workforce at Newhaven would not object “to the substitution of women for the Transport Workers’ Battalion labour which they more or less resent”.

103 women were initially trialled, handling cases up to 5cwt (254kg) and their employers, the LB&SCR were “quite satisfied with the work”. The Transport Officer had the authority to employ 1,000 women, but “in the light of experience of the work accomplished by the women on the job, he thinks not more than 750 to 800 women will be needed”. By the end of March 1918, around 500 women were employed at Newhaven Docks.

The women, aged between 18 and 50, worked in gangs of 25, undertaking the work previously done by 20 men. They worked 8 hours a day, at 7d per hour, with gangers getting an extra 9d per shift. The women dock workers had a separate dining room and rest room, made from an old railway carriage.

Photographs by kind permission of Jackie Prescott and Newhaven Museum.

Unless otherwise stated quotes are taken from Sussex in the First World War by Keith Grieves from original records held at the National Archives.

Sussex in the First World War by Keith Grieves